There's always such a positive, welcoming environment when I go to Tri Dee Art Supply in Mt. Vernon.You can tell it's going to be creative, fun and exciting, just by the way it looks on the outside!
The back wall has a huge mural that says, "Make Art Not War". It consists of 139 pieces made by members of the community, from the owner's daughter to well known artists. 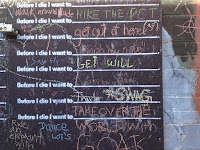 In the alley, there is a giant chalkboard with blank spaces for you to fill in your words at the end of the sentence: "Before I die I want to____________". Anyone can write on it. Just like the people who made them, the statements are thought provoking, sad, affirmative or amusing.

I liked the ones that said: Before I die I want to:
........Ride an elephant with (name)
........Dance lots
........Take over the world with GOATS
While I was outside sketching, I saw what seemed to be a newly engaged couple, with their photographer, writing that they wanted to marry each other.

On the tree out in front, there is an example of probably the most positive form of graffiti, a yarn bomb. A lovely, colorful cozy has been custom fitted around the tree. This is no beginner project, with various bright colors and patterns, extending several feet all the way up to where it branches in two, and beyond!

It was such a lovely day, sunny and in the 60's. What a treat for February! So although our sketch meet up was planned so that we could shelter from winter inside, many of us just had to take advantage of the early spring weather. Some walked up and down the block, others joined up way down by the river. I'm looking forward to seeing their sketches as they post them on the Anacortes Sketchers Blog in the next few days! So much to tell you today, so I'll post my sketches from the day tomorrow!
Posted by Michele Cooper at 9:27 PM