Spending Our One Sunny Day in Fremont with USkSeattle

'After all the recent rainfall, it was a beautifully sunny day at Hale’s Ales Brewery for the Urban Sketchers Seattle meet-up at 11 a.m. Since 1983, Hale’s claims to be the longest running, continually owned brewery, of any size, in the Pacific Northwest, and indeed one of the oldest in the entire U.S. 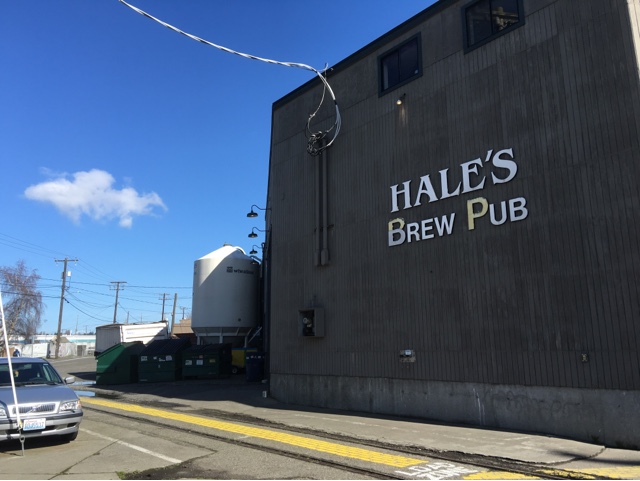 There were fascinating things (like a red London phone booth) to sketch inside, but the forecast is for another week of rain and I didn't want to waste our one sunny day! I found a great spot out back of the brewery at the corner of 8th Ave NW and NW 43rd. 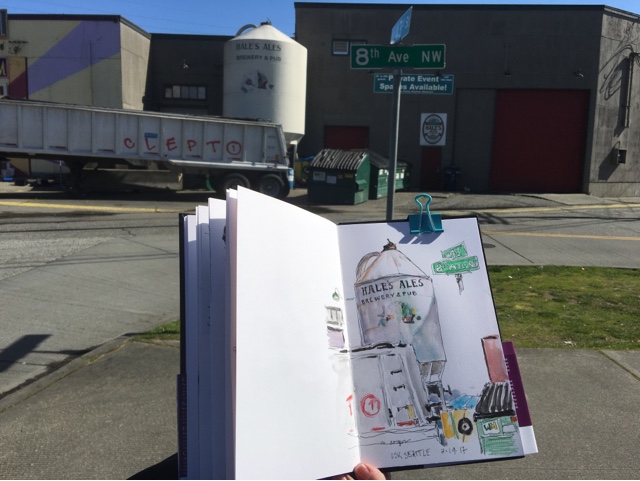 Who wouldn't want to bask in the warm sun while sketching a grain elevator with a worn out Moss Bay sign, a container with the word "clepto" spray painted in red on the side, a small spare tire secured with rope to the blue tarp on a storage bin and a nice big green dumpster? After a while, despite the sunshine, my hands did get cold so I went inside to see what the menu had to offer. 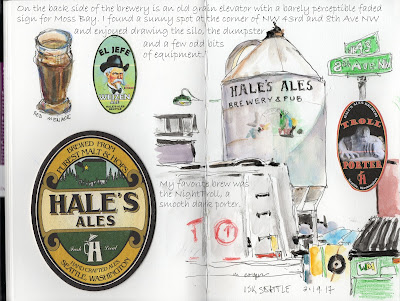 Along with lunch, a few of us ordered a flight of ales with interesting names like El Jefe Weisen, Red Menace, and NightTroll (a play on words referring to a nearby landmark, the Fremont Troll.)

I counted 23 sketchers today. I'm not surprised. When we get a sun break here in the Pacific NW we don't waste it! After sharing our sketches and getting a group photo in the Pub, I headed for one more spot on the way home. 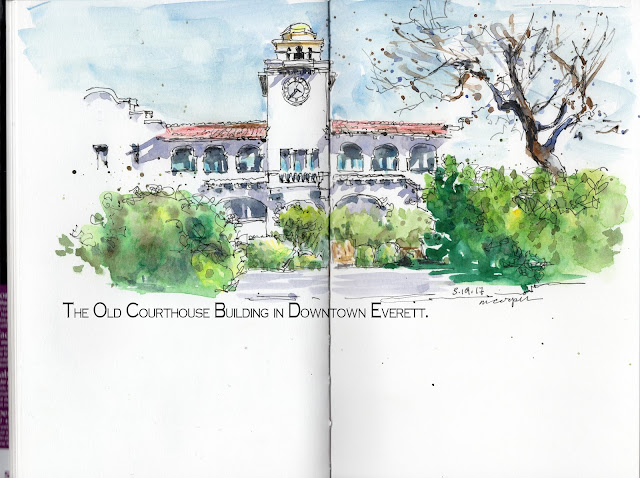 I've been waiting for a sunny day and some good cast shadows so that I could sketch the old Everett Courthouse. These shadows weren't quite what I had in mind, but we have only one day of pure sunshine before it rains again!

The front steps are no longer used and some of the landscaping is getting a bit overgrown. It's an unusual type of architecture for our area, but Everett does have a few random Spanish style buildings, including the old courthouse. The shadows I wanted would have been better in about an hour but I felt uncomfortable alone in the deserted neighborhood.  So I quickly sketched an abbreviated version of the scene and went home to add color.
Update: I was notified that my sketch of the Old Everett Courthouse I added to the Flickr group Urban Sketchers Seattle has been selected to be its cover photo. See how it looks here: http://www.flickr.com/groups/seattlesketchers/
Posted by Michele Cooper at 10:21 PM