Imagine All the People

How will I ever get 100 drawings of people in 5 days?!
That's probably one of the first things that pops into your mind when you see the proposed global drawing challenge on blogs by Marc Taro Holmes and Liz Steel. The idea is to draw 100 people in one week. It starts tomorrow, Monday, March 6, ends on Friday, March 10, and I'm in!  I'll post each day on my Instagram for sure and on my Flickr photostream and on this blog as time allows.

Start with something simple.
Ever since I first saw it, I have admired this contour drawing, a self portrait by John Lennon. 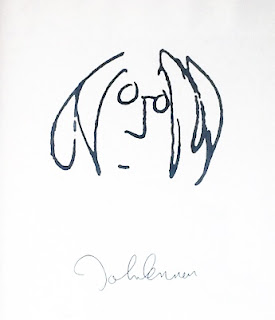 Lennon is remembered for his music but he began drawing long before he had a guitar. He attended Liverpool Art School between 1957 and 1960, before his sessions with The Beatles became a full-time occupation. Lennon would always maintain “Art came first.”

I became aware of the principles behind contour drawing through Betty Edwards' book, "Drawing on the Right Side of the Brain". It was revolutionary in 1979 when it was first published. It's the first book I advise my students to buy if they want to improve their drawing skills. I use my own particular adaptation of contour drawing all the time, especially in my sketchbooks.

Why not try a few contour drawings as warm ups and then just keep going tomorrow until you have 100 of them by the end of the week? If you like to use your watercolors, why not try simple 6 stroke figures like the ones I demonstrated here.

Don't forget to share your efforts using  #oneweek100people2017.
Posted by Michele Cooper at 7:00 AM