One of the most beautiful and subject-laden locations for a sketcher in Seattle is the Center for Wooden Boats on south Lake Union. 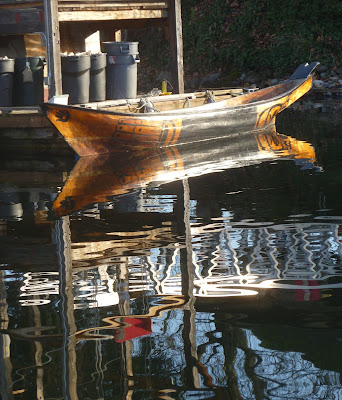 After a long cold snap, with freezing temperatures in the 20's and low 30's, our weather turned a bit more merciful. I wanted an opportunity to see the new building at the Center for Wooden Boats, as well as do a few sketches in the sunny winter air. Well, 47 degrees F isn't quite as toasty as you might think, especially out on the docks at Lake Union Park.

The good thing about visiting the center, even when closed on a Tuesday in January, is that there aren't as many people there as on a sunny summer afternoon. Parking was easy, close by and gave me a warm car for refuge from the cold. No matter when you go, however, there are just so many subjects for the photographer or the painter/sketcher.

When I first arrived, the familiar pavilion stood out, with its Native American carvings both inside and out. Looking down from the ramp, I saw the perfect image of a Haida canoe, reflected in the rippling waters of Lake Union.

It was a day of unusual names: I met a bearded fellow whose name is Jessica. He helps with the carving in the Pavilion. The Native American carver and artist in residence is named Saaduuts Peele and there's a boat named "Larry". The type of sky we had is referred to as a "mackerel sky" because the clouds are shaped like fish scales.
I do know some of the more common names for things like life rings, bumpers and buoys. I had fun drawing the shapes and shadows of these buoyant objects as the afternoon sun lit them up.

I am hoping for an answer to my email to Saaduuts regarding the bird carving. My guess is that it is an eagle or an owl with a salmon in its talons, but there is much I would like to learn about the meaning of various elements on it. What is the significance of the drawing on its wing? Will there be another like it on the other wing? Is it meant to be the top of a story pole? Does it have a name? Once I have the answers, I will record more information in the empty space on my sketch.

Note: The Center for Wooden Boats is the 10th and final location for the upcoming new series of USk Seattle Workshops. Come to Daniel Smith, Inc. on Saturday, January 28 from 11-1:30 for a presentation of the the workshops and meet the instructors.

Workshop Announcement--Explore our city of Seattle

Urban sketching is a way to combine drawing and writing. We cultivate the ability to be in the moment while standing apart as an observer. Not only do we record our drawings, thoughts, and observations for ourselves, we then post them online to share with everyone. Our motto is "See the world one sketch at a time".

To celebrate the tenth anniversary of Urban Sketchers, an unprecedented program of one day workshops is being offered in major cities worldwide. Each city will offer ten workshops by ten of the area's artist instructors.
I am honored to be among Seattle's USk instructors.

Come to Daniel Smith, Inc, in Seattle on Saturday, January 28, to meet all the instructors and a free preview.
11:00am to 1:30 pm
Join me on May 20 for my workshop on Visual Journaling, see details below

Registration and more information on all the workshops
Seattle 10x10: Discovering Your City One Sketch At A Time

Workshop Description
Sometimes the sketch location is more than a street view. It's often a collection of happenings; the sounds, the scents, the people, the weather and incidental details. There's much to explore: Melrose market, Starbucks Roastery building interior and exterior, Six Arms Pub, surrounding street views and signage. In this workshop you will learn how to combine drawing, writing, lettering and ephemera to capture your experience while on location. 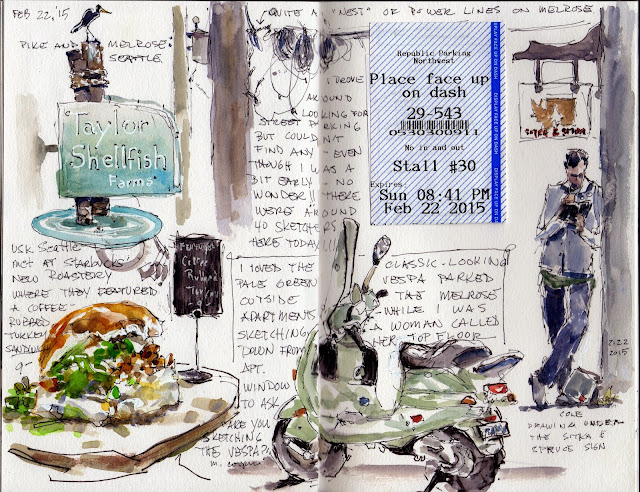 During this workshop you will learn:
You will use/practice/refine these new skills in guided exercises on location.
Instructor will bring several examples of her sketchbooks in a variety of formats for inspiration and reference.

Our location is the lively Melrose neighborhood on Capital Hill, just a 4 minute walk from Seattle Central College or 5 minutes on foot from the Washington State Convention Center.

For those visiting from out of town, you can easily get there on foot or by car, bus, uber or taxi. Check out this trip from Pike Place Market to the Starbucks Reserve Roastery - 1124 Pike St, Seattle, WA,  on @rome2rio: https://www.rome2rio.com/s/Pike-Place-Market/1124-Pike-St-Seattle-WA

We spent a lovely day at Sea Life Park on Saturday. What a great place to take two little girls, ages 3 and 7. 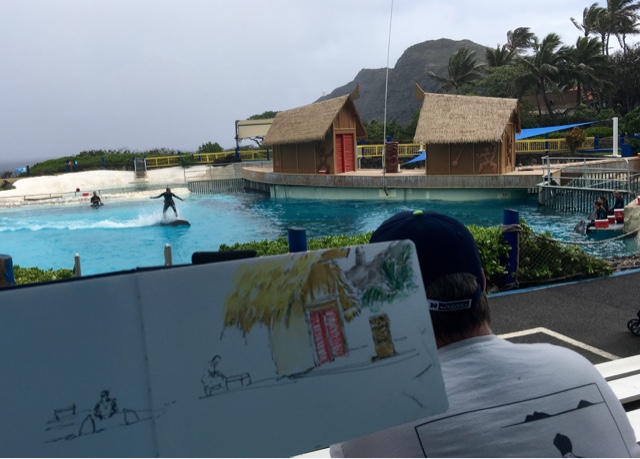 I had a comfortable seat in the covered area of the bleachers at the Dolphin  Show. Good thing! Not just to protect us from the sun, but also a sudden change in the weather! On the horizon, you can see the huge bank of a rain squall coming toward us. I was able to keep the rain off my sketchbook but there was so much salt spray in the air that my sky washes went their own way!

As an urban sketcher, I take my sketchbook everywhere to record, report and to capture the moment. After returning home, however, I learned of a new online challenge using #momentcatchers on Instagram and Facebook.

Here's what Candace Rose Rardon has to say about her new online project for 2017.
"Over the past few years, I’ve taken part in several “sketch crawls” organized by the wonderful Urban Sketchers organization.  The premise of a sketch crawl is simple: A group of sketch artists meets up in a city, spends a couple of hours sketching, and then comes together at the end to share their sketches with each other.
My vision for the Moment Catchers Project is similar, except we’ll sketch on our own wherever we happen to be in the world, and then connect through social media to share our sketches with one another." See more about this project at http://www.candaceroserardon.com/2017/01/moment-catchers-project/
I hope I'm not too late to post this one for January, Candace!

While visiting family on the island of O'ahu, Hawaii, I get to enjoy lots of experiences that are unique to this beautiful tropical paradise. This year I had a rare opportunity to sketch with my 7 year old granddaughter along with USk O'ahu. We met at 6pm tonight. 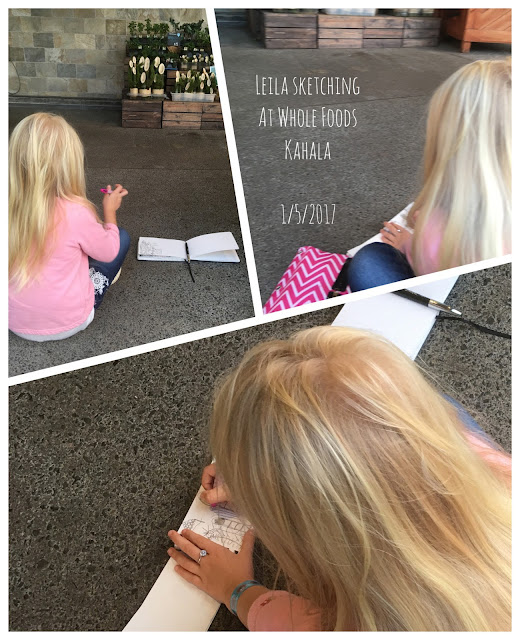 We met at the north entrance to Whole Foods Market where Leila and I got a head start on the display of Kadomatsu. These are traditional Japanese New Year's decorations made of bamboo, pine branches and tied with rope. A pair of them are usually placed on either side of the entrance of a home between Christmas and January 7. Kadomatsu means "gate pine" in Japanese. Click here for more information on this tradition. 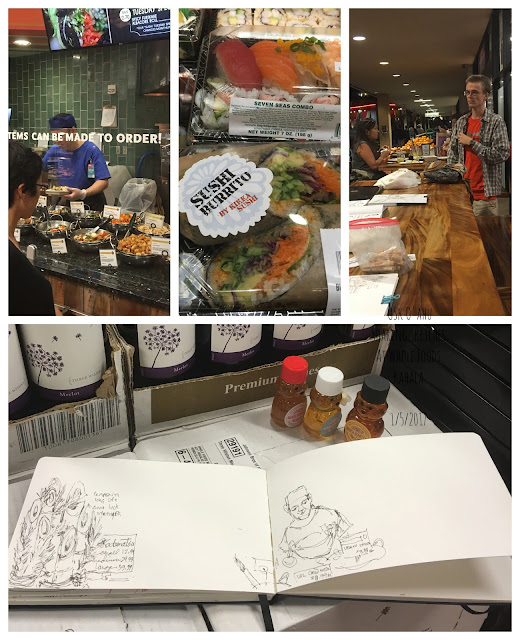 Inside Whole Foods, there was a plethora of subjects from which to choose. Sebastian appeared at a table outside between sketches and inside I made a makeshift table of some wine boxes while juggling sketch materials and tiny "bears" filled with locally harvested honey. Kristie, an employee, came over to learn more about urban sketchers. She got a business card from Harald and gave me a hug and a kiss on the cheek as she left for her break. All too soon it was time to share our sketches and say farewell.
See https://oahu.urbansketchers.org/2017/01/06/and-2017-kicks-off/ for photos by USk O'ahu. 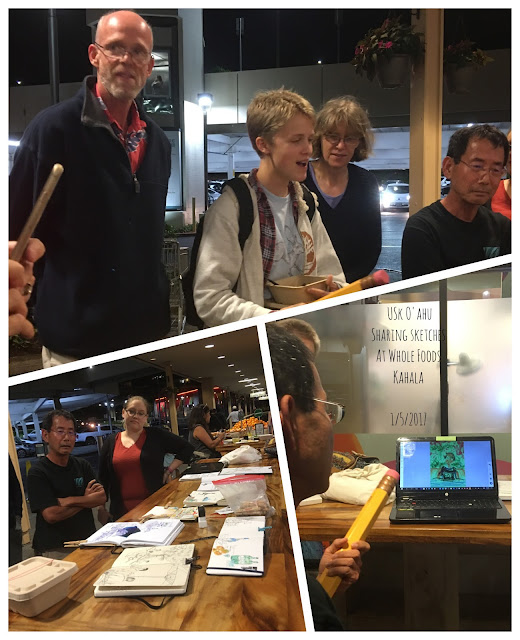 On my way through the check out stand I picked up a small bottle of organic "Ocean" vodka made on Mauii and a tiny brown shopping bag (used to hold a Whole Foods gift card) I added these, a bit of lettering and some narrative to finish off my sketch spread. Here's the result: 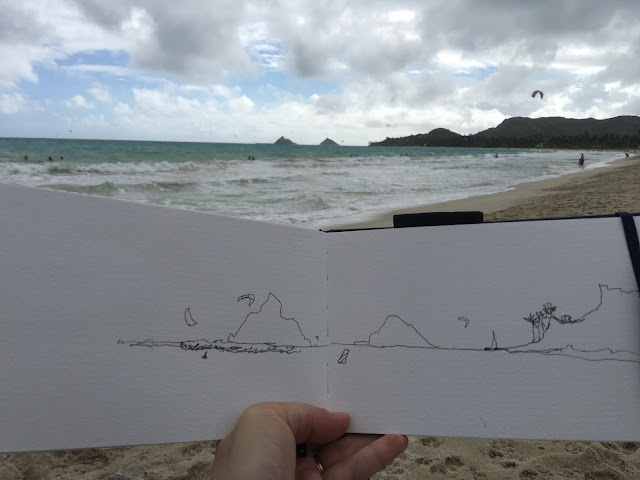 12.24.16 It was a very windy day at Kalama Beach on O'ahu with the family. We had a view of the "Mokes", two islands off Lanikai Point. The windsurfers and kiteboarders were having a great time while swimmers and body surfers watched from the choppy surf closer to shore.
Posted by Michele Cooper at 6:53 PM No comments: 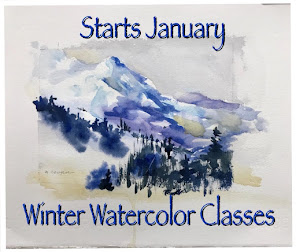 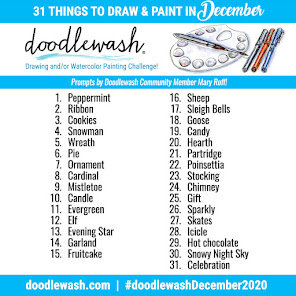